American business leaders worry about the same major risks as they did in 2014, however rising levels of concern over cyber risks and the ability to attract and retain talent have shifted the ranks in some subtle and no-so-subtle ways.

1. Medical Cost Inflation - Medical cost inflation still leads the list of top perceived risks despite a nearly 10 percentage point drop in general concern from 67% in 2014 to 60% in 2015.

2. Cyber Risks - Making the greatest leap from fifth in 2014 to second this year, concern over cyber risk has grown considerably, particularly among large businesses. In fact, 9 out of all 10 industries surveyed report cyber risks and data breaches among their top 5 concerns.

4. Legal Liability - Although general concern over legal liability has decreased only 2% since last year, its ranking has dropped to fourth from third in 2014.

5. Attracting & Retaining Talent - U.S. businesses are increasingly worried about the challenge of finding and retaining skilled labor, with a 3% increase since last year resulting in a jump from last to fifth on the list of top risk concerns.

6. Regulatory Compliance - Nearly unchanged since last year, among the 51% of all businesses concerned about complying with laws and regulations, 29% worry a great deal.

7. Broad Economic Uncertainty - U.S. business owners showed a slight reprieve from worry over the economy, with concern about broad economic uncertainty down in level (by 6%) and ranking (by 4 places) since 2014.

While the ranking of top concerns may have slightly shifted, the gaps between how much U.S. businesses worry verses how prepared they feel to manage these risks remains large. In fact, the top risk concerns are often among the 3 to 5 risks businesses feel the least prepared to handle. Furthermore, only 50% of companies report having a written business continuity plan. 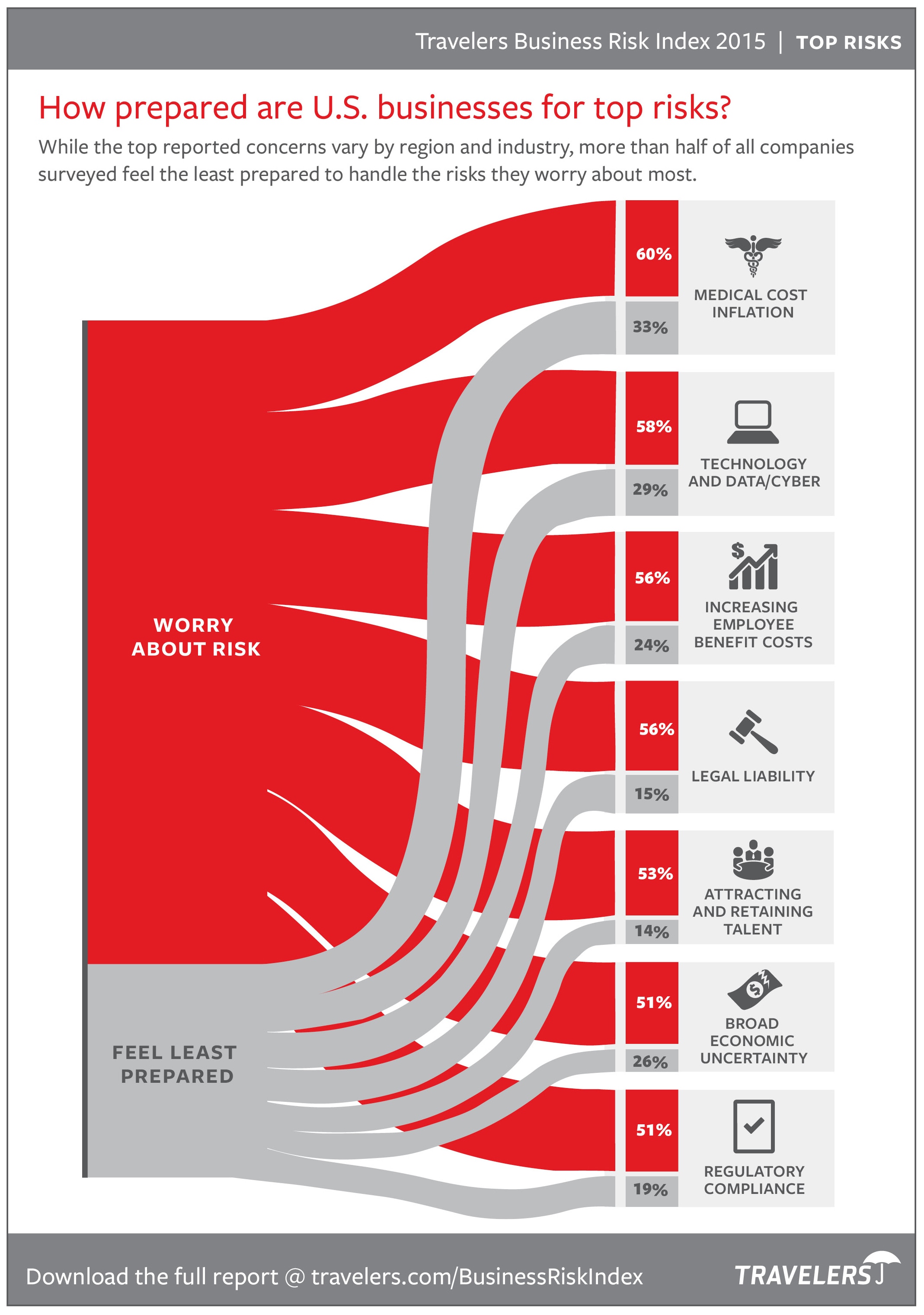 While not quite making the cut of top risks, concern over geopolitical conflict has risen significantly among U.S. business leaders. One-third surveyed (32%) worry about global and political conflicts, while one-quarter believe political unrest is of greater concern today than it was five to 10 years ago.

More than half of all business surveyed (52%) believe the frequency of severe weather events has increased over the past few years. More importantly, one-third believe these increases in extreme weather also increase the threat of damage to company property and equipment.